“Expressionism” is a term frequently used to describe various knds of artistic styles. but in Germany during the early 20th century, German Expressionism was much more than just a style; it was a major movement that strove for social, political, and cultural change. Between 1918 and 1922, German Expressionist artists communicated this quest for change through the creation of bold prints and vibrant posters that illustrated radical journals or decorated cafe sites where intellectuals and revolutionaries gathered.

This course draws upon the resources of two complementary German Expressionist exhibitions at the University of Chicago this Spring: An alle Kunstler! War-Revolution-Weimar: German Expressionist Prints, Drawings, Posters, and Periodicals from The Robert Gore Rifkind Foundation, at the David and Alfred Smart Gallery, and German Neo-Expressionist Graphics at the Renaissance Society. A series of lectures and guided tours will provide those enrolled with an informative overview of the social and artistic aspects of the German Expressionist movement, and the profound impact this movement as well as more recent political events have had on the graphic art produced in Germany today.

Mini-exhibitions:
Photography of the Weimar Republic, a selection of photographic images and faces from the Weimar Republic, organized by the Goethe Institute, Chicago, will be on display at the Smart Gallery through July 1, in conjunction with An alle Kunstler! War-Revolution-Weimar.

Lecture: “German Expressionist Prints, 1918-1922: Revolutions, Euphoria, and Disillusionment,” a lecture based on An alle Kunstler! will be presented by its curator Ida Katherine Rigby, Associate Professor of the History of Art, San Diego State Univerisity, on Thursday, May 24, at 8:00 pm.

Noon-Time Talks:
Two noon-time talks will be presented on Wednesday, May 23, and Wednesday, May 30, at 12:15 pm. Julia Bernard and Robin Reisenfeld, graduate students from the University of Chicago Department of Art History, will informally discuss aspects of the exhibition German Neo-Expressionist Graphics at The Renaissance Society.

Film Series:
A three week long series of German films ranging from German Expressionist classics such as The Cabinet of Dr. Caligari, to documentaries from the late Weimar period, to the works of contemporary German Neo-Expressionist artists. 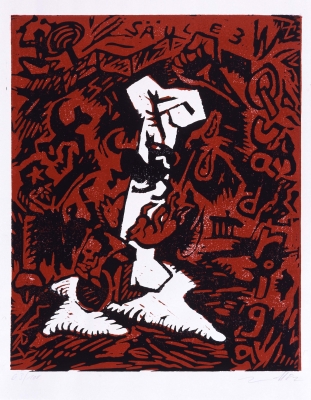