For the past three years I have been doing impermanent sculpture, sculpture that exists for a certain period of time, is documented, and is then destroyed. These pieces are impermanent because of their content, because of their placement, and because I believe that once a piece is realized there is no need for it to be “forever.” My work deals with formalist problems (shape, size, medium, etc.) but in addition it deals with elements which are intangible, i.e. mood, illusion, memory. The juxtaposition of the elements is based on a structural as well as aesthetic interdependence. The elements are chosen because of their everyday familiarity and a paradox is created when they are reinterpreted into an aesthetic context.

In working with the idea of the “given, the 8 foot cube, I decided to work with a material as temporary as the concept of the piece, i.e. dry ice; work with the effects of the outdoors, i.e. wind and time of day, when the vapor of the dry ice enhanced by white fluorescent light will be most effective, at dusk; and superimpose another structural form to inter-react with the existing one, i.e. a cinder block wall.

The documentation on tape shows four different attempts to create a “successful” piece. In the final stage, with the help of two others, I cut a diagponal across the cube in the form of a wall, to create a positive (dry ice) and a negative (white light) triangle. As the ice “sublimed,” the areas reversed and the lit triangle became the positive. 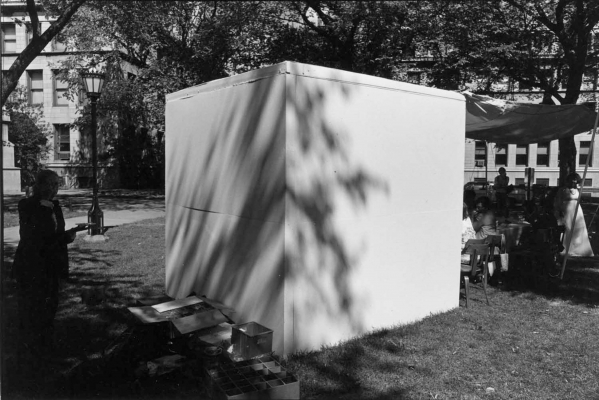