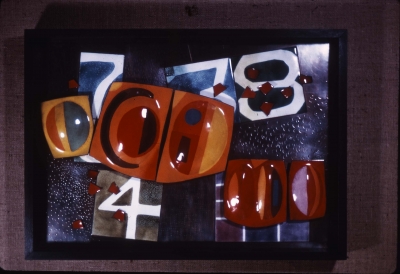 Landscape, sea, wheat fields, children and lovers walking hand in hand are the subjects of Santos Chavez’s lithographs and woodcuts. He feels his media “have an intimacy with the land, with life, with my thoughts.”

Hector Herrera’s Telas, wall hangings of linen, painted with aniline textile dyes, are a unique form of Chilean art. His colors are primary, deisgns bold. His most frequent subject is birds, but he also represents other typical Chilean objects—a painted cart gaily decorated for Inde Day, a “black virgin” based on traditional Quinchimali pottery figures, or indigenous flora and fauna. Arrangements for an exhibition of his work at the Smithsonian Institute, Washington, D.C., are now in progress.

Chavez is currently in the United States travelling on a University of Chile prize given biennially to Chile’s finest young artist. He was born in 1934 in Canihul, a small town in the Arauco province of southern Chile, orphaned at age seven, and spent his youth as a goatherd. Later he studied painting at the University of Concepcion while working nights and odd hours as a field hand, baker, construction worker and bill collector. In 1961 he went to Santiago where, at the Catholic University, he learned the techniques of the graphic arts. His works are represented in the permanenet collections of the Museum of Modern Art, New York; Museum of Modern Art, Rio de Janeiro; Museum of Modern Art, Montevideo; and the Museum of Contemporary Art, Santiago.

Herrera, 42, was born in Tome, Chile, and grew up with little formal education until, at 18, he went to Santiago. There he worked as labourer, waiter and electrician while studying drawing and painting with several of Chile’s best artists—Nemesio, Antunez, the younger Pablo Burchard and Emilio Hermanssen. His paintings have been shown in Santiago, Valparaiso, Rio de Janiero, Buenos Aires, and Lima.

There is no photographic documentation of this exhibition.