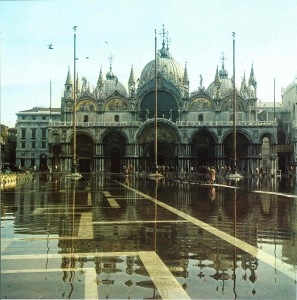 Venice in Peril and Views of Venice: Canaletto-Whistler-Masson 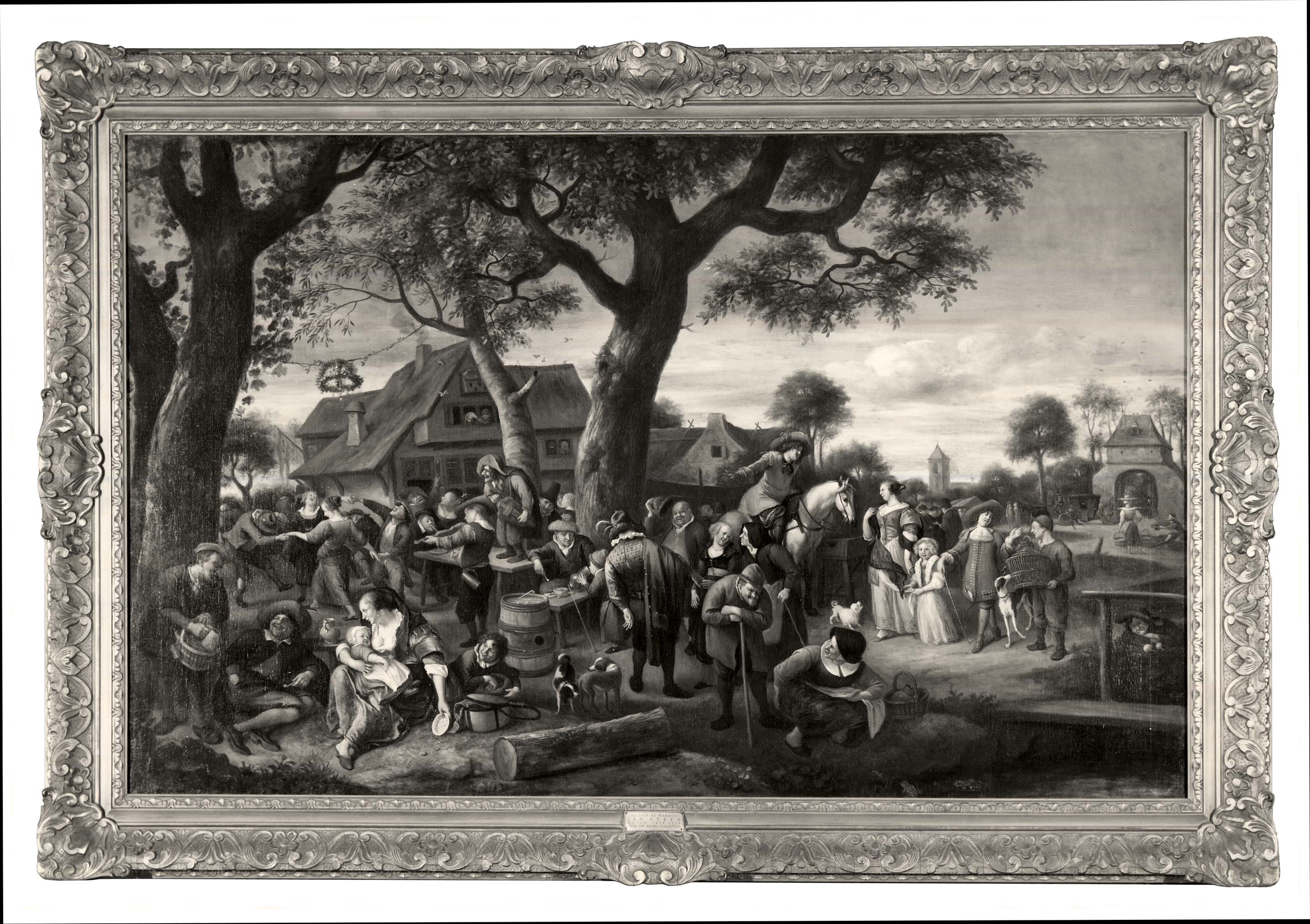 This is an exhibition that focuses on the art conservator’s techniques for examining paintings. Color transparencies and black and white photographs will illustrate what can be revelaed by such photo-optical techniques as x-ray, infrared, and ultraviolet light, and microscopic examination. These techniqes can show the artist’s sketches on canvas, how the artist changed his/her mind when working, later changes, additions, deletions, what can be learned from crack patterns, and how originals differ from copies.

Original works will demonstrate the results of restoration. One is “Judith,” a painting by Giovanni Martinelli from the collection of the Art Institute of Chicago. A recent cleaning of this painting revealed a second figure that had been painted out. Another is an untitled village scene by Jan Steen, an investigation of which showed that a female figure was repainted into a more decorous position. A third is a pastel drawing of a dancer by Edgar Degas that had been altered by a dealer to make it easier to sell. The drawing was restored to its original state by removing the top layer of pastel.

The exhibition is organized by Louis Pomerantz. After being shown at The Society, the exhibition will tour Illinois.

Text by Karin Rosenberg, Director of Exhibitions, from the exhibition brochure:

How does the painting we look at in a museum today compare with what the people saw when the work was fresh? “You read contemporary descriptions of these works and you begin to wonder if you’re seeing the same things, ” says Chicago conservator Louis Pomerantz. Pomerantz conceived of the exhibition Know What You See in order to demonstrate what can take place in the life of a painting: alterations made by the artist, physical and chemical changes that the surfaces undergo, and changes made after the artist’s death.

These changes come to light in various ways. Collectors and curators will often bring works to a conservator if they suspect something is not quite right. If the information provided by the conservator’s x-ray, infrared, ultraviolet and microscopic examinations is read in the light of the art historian’s knowledge about the painting, a great deal of information may be gleaned. The conservator is able to provide an objecive basis for the suspicions of the historian or curator. Working together, they can come closer to the truth than can any one of them working alone.

An interesting case is a pastel drawing of a ballerina brought by its owner to Katherine Kuh, formerly a curator at the Art Institute of Chicago. The outline and the position of the dancer suggested Degas, but there was something wrong with her sweet pretty looks. She simply wasn’t forthright enougth to be by Degas. Mrs. Kuh sent the collector to see Pomerantz, who showed the drawing to Harold Joachim, curator of Prints and Drawings at the Institute. Joachim reached immediately for a catalogue made of Degas’ estate following his death—a catalogue made to prevent later falsification of the artist’s ouevre. In it was a ballerina closely resembling that of the collector’s drawing in its contours and inscriptions. Joachim felt that they had a reworked Degas and that if the drawing on top could be safely removed, they would find the original underneath. To attack the problem of removing chalk from chalk, Pomerantz made careful tests with a pastel stump, rolling the point over a tiny section of the drawing. Fortunately this revealed that the top layer of chalk had not been fixed, but the original was. It was therefore possible to remove the added material, although the most difficult part would be to remove the powdered chalk from the interstices of the rough-textured paper. Ultimately a Degas was recovered that had been effectively destroyed.

One can speculate about the reasons for the changes: the original represented a rather rough, unfinished sketch and, in accordance with the taste of the period, a collector or dealer may have wanted a bit more of what he thought was grace and beauty. The reworked version became a lot less valuable, if more saleable at that time. Now, of course, it is both extremely valuable and saleable.

A change in taste was probably the only reason for a repainted figure Pomerantz discovered by surprise while cleaning Jan Steen’s Fair at Warmond. After several tiny test cleanings (actually each color in the painting had to be tested separately to determine what kind of solvent would be safe and work best), Pomerantz determined that the painting was in sound condition and that he could proceed safely with the cleaning. When he was about a third of the way across, he noticed some red paint on his cotton swab. The solvent he was using should not have dissolved aged oil paint from the 17th century. Under microscopic examination it appeared that the figure—a squatting woman pouring water from a jug—was overpainted from the head down. As the overpaint came off, a female figure was revelaed underneath whose position gave away the reason for the overpainting. Originally, one hand had been under the front of her skirt and one hand under the back. She was engaged in an earthy activity, the kind of thing depicted frequently in the works of Jan Steen.

Once an examination reveals the deviations from the artist’s intention, the workis not always restored to its original condition. Some people prefer the brown glow of discolored varnish to the bright colors the artist used. In addition, there are alterations caused by natural processes, such as the appearance of pentimenti. In The Three Patten Daughters a spectre of another, earlier painting began to come through the later painting. With age, oil paint becomes translucent and the painting underneath, not visible when the artist finished the canvas, made its presence known through pentimenti. A fourth head is making its appearance along with parts of a baby carriage. The owner decided he liked the air of mystery it lent to the work and decided to leave it that way, rather than having the spectre painted out. Another case documented in the exhibiton is a Corot, where an extra mountain is entering the landscape.

Few alterations can be detected with the naked eye. Most require the conservator’s special equipment which enables him to make the invisible visible. Visible light, in fact, forms only a small part of the spectrum, ultraviolet light falling above and infrared below. Under ultraviolet or infrared light, certain materials flouresce and this flourescence, picked up by intstruments and recorded on sensitized film, tells a good deal about the condition of the painting. Ultraviolet light will indicate repainted areas on top of or just below the varnish, while infrared will show filling, applied where paint has been lost.

If a painting is darkened by old varnish, infrared light will show the details hidden in the darkened area. Later copyists of Rembrandt were unable to see the myriad details hidden by grime and discolored varnish in the originals and thus under infrared light their works are easily discernable from those of the master.

X-rays penetrate most deeply and provide a composite of paint layers. Specifically, a radiolography records the density of the paint and by reading these densities one can learn something about the materials in the painting.

If an artist uses glazes, it is possible to see his drawings on the canvas. Infrared photographs of Mazza’s Education of Cupid (a sixteenth century Venetian painting in the Art Institute) illustrate his rapid, sketchy techique. Radiographs of Corot’s* Interrupted Reading* show how Corot worked and reworked the right arm, the neckline and a headband until he was satisfied. Also, raking light clarifies the topography of the painting and by indicatiing the build-up of paint layers, can show how the artist changed thhe composition. The photograph of the Corot under raking light shows three different positions of the right arm.

Crack patterns are another revealing area of study. Cracks may have various causes, but generally they result from the reaction of wood, canvas or paper to variations in humidity. As the support shrinks and swells with changes in humidity, the aged paint, which is more rigid, cannot follow the movement without cracking. On x-rays the spaces made by cracks show up black because they have no density. If they show up white, it means that something has been painted over them. Such is the case with the veil of the Madonna and Child attributed to Gerard David in the exhibition. Signatures added years later will show up as bridges over valleys in microscopic examination of age cracks.

One thing the viewer can learn to “know what he sees” from the exhibition is to determine without instrumentation whether he is seeing the painting as the artist saw it when it was fresh or whether he is looking through a veil of grime and discolored varnish. A black background may appear brown when covered with orangey varnish; a green sky may actually be a blue one coated with yellow varnish. Since it is traditional practice in painting to strive for a balance between the hot and cool ends of the spectrum, paintings that are overloaded with orange or yellow tones are very likely suffering from discolored varnish.