The Renaissance Society will open an exhibition of paintings, drawings, prints, illustrations and typography of Victor Hammer with a reception for the artist on the evening of May 20, at 8:30. The exhibition, which has been made possible by loans from many sources, will be open to the public though June 19.

Victor Hammer is an American citizen, born in Vienna 65 years ago, who came to the United States at the start of the European war. Painter, architect, craftsman, printer and teacher, he has done outstanding work in each of these fields, and his standards of craftsmanship, which are of the highest and most exacting, can be seen in all of his work.

As a painter he has been known though his portraits, which are to be found in most European capitals as well as in the United States. He has also painted many religious subjects and other compositions. A recent painting, just completed, Aesopus and Phodopis, is in egg tempera; the others are all in mixed technique, tempura and oil. Water color is one thing he has never wanted to handle. ” I don’t like the wet technique,” he has said. “I want to feel the obdurate material.”

Behind all of his paintings is a definite, geometrical plan. Claud Berger has said that one could think of Mondrian, looking at Hammer’s paintings. “But how sweet it is,” Hammer has written, “to tell a story- tell it in these cold, geometrical terms which the observer is not aware. I am engrossed in the abstract design, he is engrossed in the story told. No compromise, but perfect understanding.” 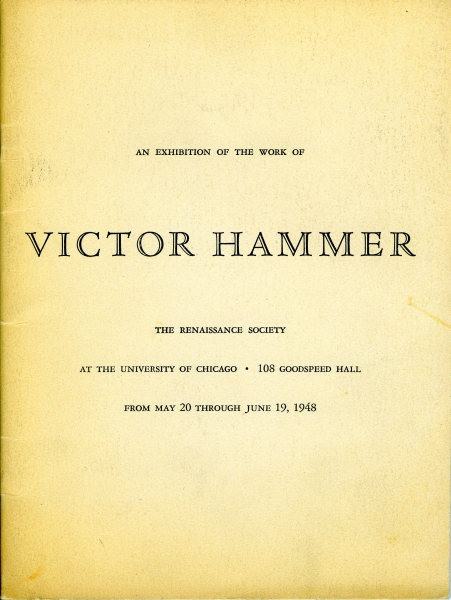 Victor Hammer on His Art