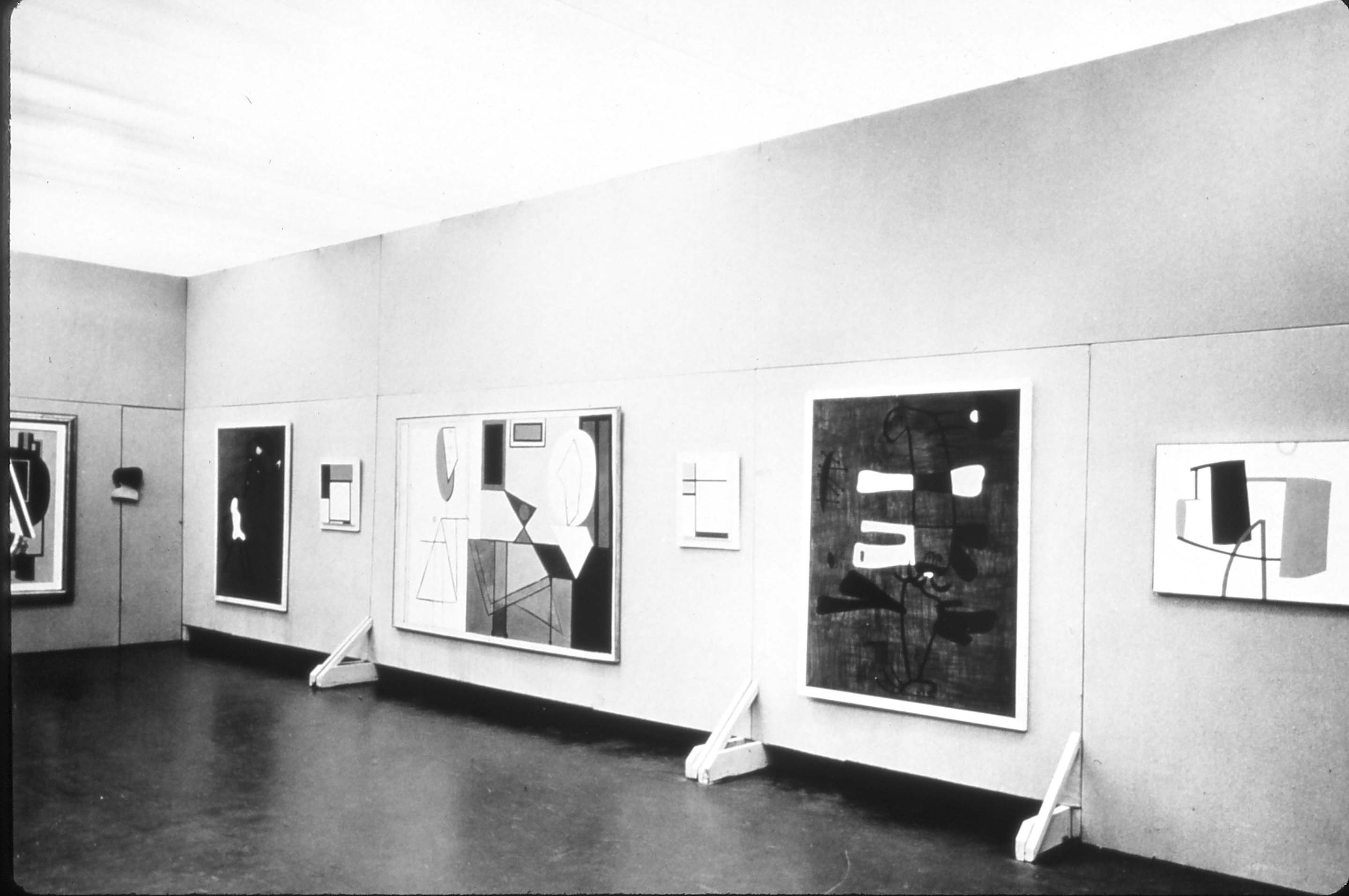 A Selection of Works by Twentieth Century Artists, Installation View, 1934.

From the exhibition catalogue, written by Eva Watson Schutze:

The intention of this exhibition was the selection of a few significant works by contemporary artists that should give a sense of the varied and fresh reaction of imaginative insight in terms of plastic expression to the “mind” or disposition of the present time.

It is certain that the exhibition in connection with the publication of the series of brief studies in “meaning in art” will help to illumine developments of the time that have perplexed most of us, and will release for us more fully a sense of the vigor and beauty inherent in the present.

The Society is fortunate in having had the rare services of Mr. James J. Sweeney in selecting and installing the exhibition. As it is his conviction as well as ours that all a work of plastic art asks “is to be looked at” we shall quote as an introduction mainly some words about and by the two artists most prominent in the exhibition.

But first, what Mr. Sweeney has said about Picasso in the special number of “Cahiers D’Art,” 1932, No. 3-5: “To those who look toward the future for a European pictorial art which will take its place beside the great decorative traditions of the world rather that lumped as it has been for half a dozen centuries in the parochial naturalism of the Mediterranean Basin, Picasso stands an avatar. His plastic myths have already cut back to the picture which is primarily a decorative unit, rather that an ideational compost of the illustrational.

“For, in despite of labels, what humanism brought to the plastic arts never succeeded in effectuating a renaissance. It began as a decadence and spread as one. The turn toward antique naturalism which heralded the revival of classical learning in Western Europe was made away from that sound decorative tradition which had grown out of the combined oriental influences of the migration of arts and the Aramaean imports of Christianity…..

“Today we are the inheritors of six hundred years of misdirection in the plastic arts. Basically naturalistic- at times even compassing ‘realism’- always a ‘copying.’ And nature, as Nietzsche warned us she would, has taken her revenge on us for disregarding the myth, for allowing it to decline to a ‘fairytale,’ for not bringing it back to virility. In short for ‘the abstract character of our mythless existence.’ Esthetically we have become a dry, colorless people….. our art has decayed either into a Hackneyed academicism, or an illustrational attitudinizing, both finally dependent on technical virtuosities.

“It is, perhaps, in the younger communities (which if any should be colorful and fresh-visioned) that these gray, decadent characteristics are most assertive….. to compass an art of vitality they must forget the sophistication of decadence, and learn to see with young eyes to respect the intensity of intuitions.

“The object of their art must become the statement, intensely as possible, of an intuition. This necessitates a representation of forms adapted from nature. But nature only s a means to an end: a source of forms. Naturalism, or the means tht outgrow the end, must be avoided. Hence they must refind the ‘fictional form’ and the plastic myth.’

“Picasso has already shown the way.”

In “the arts,” May, 1931, Mr. Sweeney writes: “Leger contrives mechanistic images with the imagination, as others compose their landscapes…..

“Leger’s latest works are not to be seen as part of a room [‘decoration’], but as compositions of volume, light, line and color, and enjoyed for themselves, as we enjoy a sonata or a fugue. His art is an ‘art of space.’…. His object is the suggestion of a third dimension that will remain with the plane of a picture’s composition, and through it, a fresh integration of line, space, light and color toward the creation of a plastic unit.”

“Fernand Leger said,” continues Mr. Sweeney: “‘We have projectors which pry into the most remote corners with their beams; we can actually wee through bodies. These new instruments have given us a new outlook. We want to see the thing clearly; we want to understand its mechanism, its functions, the source of its energy in the most minute detail. The whole no longer suffices; we wish to feel and grasp each detail tht makes up the whole- and we have come to realize that these details, these fragments, if we isolate tem, have all integral and individual lives of their own…..

“‘Some years ago one thought only of a face or a body, then gradually one grew interested in [influence of the “close ups” of the movies] and began to examine with curiosity the eye or the ear related to that face. It is this attitude that marks the advent of modernism. The object and the fragments of an object have been discovered- more, we have recognized in them their beauty, for they all have in them a beauty entirely their own, inherent, individual…..

“‘Objects play their part in the pageant of the streets; for the display windows and in the shops we set them apart, we personify them…..

“‘We produce the useful and we produce the beautiful. It is not beautiful because it is useful, that would be too simple. But we force ourselves to make the object “beautiful in itself” and not by overlarding it with decoration- again “the spirit of our age.”….

“‘The oriental, mediterranean and latin civilizations have left us sme remarkable works of their creation, works of such power and quality that it might seem impossible ever to free ourselves from them. However, certain recent developments have, I believe, been called into existance to renew the spirit of the world…..’”

[Perhaps the best statements in a work of plastic art is the seemingly simple proposition of Leger’s in regard to revolution(the state of tendency) and equilibrium (the state in which a “full living” is possible)]:

“‘One can only live in a state of equilibrium.

“‘In art the same holds good: there has always been the state of reaction against something), but this state of incompleteness is never satisfactory.

“‘A plastic fact, whatever its specific nature may be, ought always to be valuable in itself and not because it reacts against something…..

“‘Then, arrived at this nicety, this critical point, this “perhaps,” I find myself faced by the total incompetence of rational and explanatory expedients to bring me and further.

“‘Logic and the analytic spirit can penetrate a work of art to a certain depth, but never to the roots…..

“‘The indeterminate quantum, which we have symbolized by the figure 3, represents this difference between the analyzable elements and the complete work. This symbol (expressed in the figures) swells to a prodigious importance and hovers mysteriously over all creative work. It assumes the leading role in that elusive, impalpable drama. Modern rationalism which would explain all, understand all….. stumbles here, stops, and will always stop before the phenomenon of creation…..

“‘Every new civilization, every work of art ought to keep the figure 3 before it [the inexplainable, the unforeseeable]; that is maturity’s symbol.

“‘The danger for young civilizations is that of stopping figure 2 in the belief that equilibrium can be established there. That it frequently finds itself halted at figure 2 is the prime difficulty with which the present confronts the nascent nordic civilization- notably in America…..

“‘There is a second danger- the culture attitude. A young race has a tendency to depend on compassing its equilibrium by leaning on the older neighboring civilizations. In art such an attitude is usually sterile….. spontaneity and instinct should be the basis of all artistic creation. We create in “heat”- culture is cold, it is analytic…..

“‘When this civilization will have come to its fullness, to its equilibrium,one will be able to discern, I hope…. the cult of the beautiful in which we are now living, which we are creating, but which so few recognize…..

“‘Alone, isolated amid all this desire of luminous scrutiny, the work of art unfathomable by the modern projectors, is perfecting itself in the half light, in the unknown. For it is daughter of the instinct, of the sensibility, and a higher unconscious order of things that will shelter it always from the indiscreet pryings of analysis.’”

From the exhibition catalogue:

“An accomplished work of art is as such more complete and precise evidence of its meaning than could be any other expression, even by the author himself at another time or place or in another less creative state of mind.”

The mode of thought by which a work of art is created or understood is “an ultimate of abstract rational understanding and expression….. its object is the creation, understanding, and communication of integral closed unities of intelligent experience.

“The ultimate evidence of meaning in letters and the arts is the complete literary or artistic utterance itself.

“The legitimate meaning of a work of letters and of art is only that and all that which can be fairly won through an intimate and discriminating study of its utterance.”

In developing a program for the pleasure and profit of members of the society (in the city and its suburbs), and in particular for the University community, including students, who come from all parts of the United States- the Society believes that it can be of most value to the University, especially to its department of art, as an independent, experimental laboratory for search of legitimate meaning in art.

The conviction that this search must be a direct one, as is expressed in the statements quoted above (ideas which have been taught on the campus for many years) has led to the arrangement of a series of related exhibitions, not large, but selected from the best examples obtainable from museums, private collections, and art dealers, who have most generously assisted in the realization of such a plan.

We believe that this plan followed consistently (and uncompromisingly, as to the quality of exhibits) has proved for us that the method of making contacts and establishing relations directly with the original works of art is the only sound one.

Exhibitions have been supplemented by lectures, “case exhibits” of related material in photographs and reproductions; by exhibits of standard and “modern” illustrated books and monographs- even the films have contributed their part: “La Ballet Mechanique,” by Leger, shown by The Renaissance Society, and a series of modern foreign motion pictures given by the Renaissance Society and International House.

The Publication, through the University Press, of a series of brief studies on “meaning in art” has been undertaken in response to expressed wishes that some of the lectures should be available for reading, and it has been arranged that the first and perhaps the second volume should come off the press at the time of the present exhibition- the third to follow later, with and exhibition of appropriate material, in the late Autumn.

One of the objects of the Society is to collect original works of art for the use of the department of art. Initiated by Mr. Robert Allerton a fine collection of prints is being made.

A Selection of Works by Twentieth Century Artists:...