At the outset of our work together on this Renaissance Society exhibition, I spent three days with Nora Schultz in her new and empty Berlin studio. Rather than look at work (there was only white walls and bare floors), we talked (not even so much about the show) and read (sources, touchstones, whatever books Nora had already moved in). The experience was sincere, social, and intensely constructive—a reset of a curator-artist relationship. This type of interaction correlates well, in fact, with Schultz’s mode of practice overall—as a printmaker, a sculptor, a performer, and on. On our first day, she summed up this position rather neatly: “I use immediacy to figure out if I can overcome the strangeness of the reality around me.”

By ‘immediacy’, a descriptor Schultz often employs, the artist means a readiness and directness built out of discursivity. A central question for her production is, then, how ‘immediate’ art can be? Yet, even as she takes for granted the possibility of unconsciousness within art objects, she remains well aware that her practice’s processes necessarily are based on conscious choices. Language provides an essential model for her here, in that words and speech are boundaries and barriers, reality always divided by meaning uttered and not. This is not to say that her sculptures, prints, audio-works, and performances follow a superstructural network of references that would allow for a given work to objectively BE from its inception. Rather, she operates without an overarching theoretical frame, eschewing the idea that a lived chaos could be ordered by any guiding terminology. The work is opened to subjectivity; what is there in front of you is what is there to be encountered and considered. It IS.

IS-ness allows the artwork to function independently of the artist, of the gallery, of the viewer, of any single context—subject only to its material existence and our attempted address of it. Experiencing a work by Schultz is not unlike sitting in that Berlin studio, immediate and provisional, a constant negotiation. One could then say that rather than the notion of the autonomous artist—that genius-centered ideology of the mid-century studio—Schultz’s practice proposes the autonomous artwork. But this autonomy must not be confused with an Adornian understanding of that same term, in which art, in order to be free and true, has to be separated completely from our common reality and daily lives. Schultz’s autonomous artwork reflects the opposite: only by adapting and adjusting to any context can an artwork become independent.

Assimilation and self-determination define Schultz’s artworks from their genesis. The artist sources the materials she works with by scavenging around the site of exhibition, confiscating valueless (valuable) refuse such as rubber, steel, paper, whatever. She frees these objects by disassociation, estranging ‘things’, moving them from one context to another so they can become: forms, colors, lines, themselves. The installation transforms these objects once again; in the gallery, her works layer themselves and each other, fully taking advantage of three dimensions, constantly redefining their parts in relation to one another. Elements stand, hang, and print on one another; each piece frames another, reweights another, depends on another. Language then intrudes: Schultz’s titling, her words in interviews and conversations, the ephemera (posters, texts) she releases alongside subject these objects to external references, estranging them further. And, of course, there is the work’s reception throwing everything into new relief once again. In this way, the artist suggests an art that is a predicament, at most a shifty, evasive, and radically unsettled state for a group of transitory objects and ideas. This work is ‘finished’ when it is shown, but only at that moment, in that place; everything will finish again and again.

Schultz has long used the frame of the ‘machine’ to capture her proposed autonomous artwork. Many of her installations literally orbit artist-constructed printing machines, some rotary apparatuses that are capable of producing wildly expressive and monumental works on paper, some simply contact, using rigged foam and metal ‘blocks’, that intermittently transfer in dabs and dots. Exhibitions accrue from these devices, printed papers winding out across walls, objects framed by marks of paint. Other projects have used recorders and microphones, while cars parts and disused mechanical objects are plentiful in her found materials. The idea of the ‘machine’ is also a stand-in for those initial questions of immediacy (the artwork unfixed) and autonomy (the artwork becoming). Following a circle of self-reference, the ‘machine’ is an object on the boundary of independence: at once reliant on its maker and his or her plan, yet also a determinant of its own production to which the supposed operator must adjust. Humans have a ‘machine’ language: words are parts that form mechanisms that imbue us with the ability to express ‘freely’.

It’s so easy to get caught up watching Schultz’s works ‘act,’ that one can lose track of how they ‘speak.’ Most evidently, there are the materials found and estranged. On one level, these objects tell of daily existence—what is produced, used, and discarded, what is needed and what is obsolete. On another, they make plain the weirdness of their very existence—awkward and degraded physical forms shifting into something far stronger, cohesive, remarkable, and beautiful. And on yet another, as artwork, each addresses Schultz’s own role in the strangeness of here and now, as an artist, as a person trying to translate and to find meaning in such chaos.

Considering how the artworks interpret their surroundings, it is tempting to connect the artist’s practice to an ethnographic approach. Schultz has made many explicit references to seminal ethnographic writings—particularly surrealist ethnography—in her exhibitions, interviews, and the texts offered as ephemera surrounding her works.(1) Even as the constituent elements of her artworks evade singular definition, they offer a multitude of definitions, making meanings of given realities. Instead of romanticizing a long gone past or a distant land, Schultz works in an ethnography of the close present. She and her art are part of the present, and, of course, the past is part of that present, and art history is part of any present art. While Schultz engages that language of the ‘ethnographic,’ she cannot abide its authoritative address of an ‘other.’ There is an otherness, but it is one, the work would suggest, within ourselves.

The Renaissance Society exhibition draws together all the preceding strands into a new synthesis, one anchored by a narrative intrusion specific to the Hyde Park neighborhood where the museum is based. For nearly half a century, monk parakeets (a variety of parrot) have inhabited nearby Washington Park. This despite the fact that the species is nowhere near indigenous to the region and should not have been able to survive Chicago’s harsh winters. Nonetheless, somehow, they have adapted and persevered. The birds build huge nests with thick walls and many apartments like skyscrapers, and not on trees, but on buildings (emanating warmth) and billboards (right next to the heating spotlights). They also employ a tough screech to threaten their unlikely human and animal neighbors. They are immigrants, extremely assimilable.

Schultz refers to this settler bird not as a symbol, but as a co-producer of the exhibition. The partnership marks a shift in the artist’s work away from the ‘machine’ and its sympathy for the self-perpetuating spirit of production, a catalyst allowing a true becoming, and toward a model of autonomy based on imitation and substitution. Unlike the machine, the human does not instigate a parrot’s speech, but rather offers a form for the bird’s vocalization via repetition. The work suggests autonomy as disassociation from one’s roots to mimic one’s surroundings. The bird is at once natural and authentic, and completely contrived by its unreal situation; it is an intelligent animal that is, in fact, mechanically repeating.

The imaginary partner leaves its traces throughout the installation at the Renaissance Society: in poetry on the poster, in sounds in the gallery, in photos and scraps dispersed around the installation, in architectural structures and tools that imitate the bird’s nests, like the tripod. Most intriguingly, Schultz includes what she terms ‘real objects.’ These are a collection of artist-created works assembled to look like scavenged goods, a meta-language estranging the found-object installations for which Schultz is well known by parroting their constituent parts. Finally, she addresses the bird by the inclusion of its logic’s inverse: formally adventurous three-dimensional intrusions that attack the Ren’s grid-and-Gothic architecture and strive towards complete non-referential abstraction. That they may fail only underscores the brutality, insurmountability, and oddity of the parrot regime under which we all live.

By the inclusion of this stranger, the monk parakeet, as a collaborative partner, and the immediacy (albeit occasionally fictional) evident in every formal choice, Nora Schultz demonstrates her ultimate position. She chooses to replace control and calculation with complexity and transparency, which allows the viewer to participate in her honest—meaning earnest, available, felt—struggle to translate and decipher our reality.

(1) For instance, during our time in the studio, Schultz and I browsed and discussed Michel Leiris’s pseudo-autobiographical history of French ethnography, L’Afrique fantôme, and James Clifford’s The Predicament of Culture, an ethnological history of the other in relation to Western museological and cultural practices. 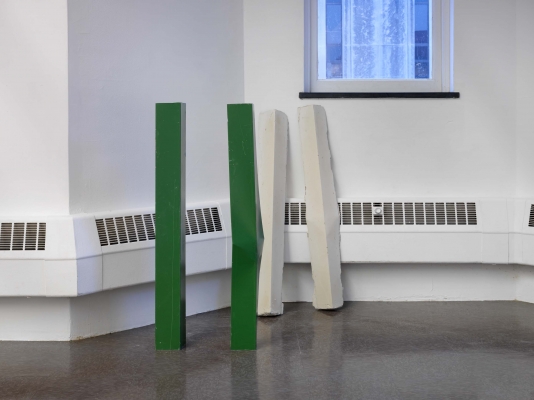 parrottree — building for bigger than real