Norman R. Morrison’s anti-Vietnam War sentiments ran deeper than a passionate conviction. They literally consumed him. On the afternoon of November 2, 1965, he drove from his home in Baltimore to the Pentagon building in Washington D.C. By 5:00 p.m. he was standing beneath Defense Secretary Robert McNamara’s window. After dousing himself with kerosene, he held his 11-month-old daughter Emily one last time. Putting her aside, he set himself ablaze with fatal results.

No one expected, let alone knew of his plans to carry out such a grave act. A devout Quaker, Morrison modeled his immolation on that of Thich Quang Duc, a Buddhist monk who two years earlier set fire to himself in a busy Saigon intersection opposite the American Embassy to protest the South Vietnamese government’s campaign of religious intolerance. The utterly surreal image of a beatific monk engulfed in flames became instantly iconic as an indictment of the Vietnam War in general and of the U. S. backed Diem regime in particular. It was that image which made Morrison’s act legible to the Vietnamese as a gesture on their behalf. While there was heavy speculation in the American media as to whether Morrison intended for his daughter to share his fate, the North Vietnamese memorialized Morrison as a hero, honoring his memory with a postage stamp, in poetry, and street names where, in Vietnamese dialect, his name is translated Mo Ri Xon.

Malachi Ritscher’s name will not be subject to this same treatment in Arabic despite his protesting the Iraq War in a manner identical to Morrison. Exactly forty-one years and one day later, during the morning rush hour of November 3, 2006, Ritscher, who was an electrician here at the University of Chicago, set himself on fire at a downtown expressway interchange. Ritscher’s suicide remains irreducible to either a statement of protest or the symptoms of an emotionally disturbed individual. Taking Ritscher’s immolation at face value, however, still begs the question of its current legibility. Less a sacrifice on behalf of Iraqi war victims, it was more an expression of impotent rage not only directed at politicians but also individuals who, while they may share Ritscher’s sentiments, are susceptible to an apathy accrued from a seeming inability to effect meaningful change.

Four days before the Congressional election and five days before Rumsfeld’s resignation, Ritscher’s death occurred on the eve of major political realignment. But three and half years into a deepening debacle, the 2006 election results were hollow vindication. The reasons for invading Iraq had already been acknowledged as deceitful, making Ritscher’s death a futile indictment. Arguments about whether the invasion was right or wrong had become moot as the rhetoric of winning was displaced by that of leaving. Between its unmooring from the events of September 11th, and the emphatic rejection of a timetable for troop withdrawal, the war, by November of 2006, had taken on a life of its own with or without Rumsfeld. Worse than the public’s trust having been betrayed was not knowing toward what end. Ritscher’s suicide does not express a collective anger over why we invaded Iraq. His death instead corresponds to an inability to envision both the ends and end of the current military campaign.

Meanwhile, in Baghdad is a group exhibition whose premise is a simple rhetorical question, namely: where are we in the Iraq War? Newspaper headlines make it hard to distinguish the turning points from mere ups and downs. Harder still is capturing the psychological arcs suggestive of broader phases such as our current resignation to the fact that no one knows the length of our engagement. The selection of work for this exhibition addresses the war with varying degrees of directness. At the same time the war can serve as discreet content, it has also become a backdrop informing how we read works of art even if they do not announce themselves as being about the war in an overt way. Such is the case with the work of Jannis Kounellis and Matt Davis. Kounellis’ untitled assemblage consists of three bedframes wrapped in red painted strips of canvas suggestive of blood-soaked bandages. Matt Davis’ psychedelically altered, photo-based image of a paratrooper, with its strange overtones of an exploding soldier, also speaks volumes to the exponentially expanding scope of problems relative to what are all too finite resources. Other works such as Daniel Heyman’s etchings of Abu Ghraib victims of torture and Jonathan Monk’s lifelike sculpture of a wounded young man put the war in art historical perspective by referencing such figures as Goya, Dix and Chris Burden.

As the topic of war well warrants, Meanwhile, in Baghdad oscillates between visceral works such as that of Kounellis and textual works by the likes of Jenny Holzer, Maryam Jafri and Ann Messner. Jenny Holzer’s recent work draws on redacted and declassified government material for the kind of harrowing scenarios she previously fabricated. Maryam Jafri’s photo-collage series entitled The Siege of Khartoum 1884 is a game of pattern recognition in which the Iraq War, via earlier journalistic accounts, is linked to previous American and British colonial and postcolonial escapades. In addition to being portrayed as a mosaic, the historical narrative of empire is also revealed as a continuum. Ann Messner’s freely distributed tabloid The Disasters of War anthologizes excerpts of writing from an array of notable voices distilled into a concise and highly critical record of the first three years of occupation.

As for bearing witness, Helsinki-based artist Adel Abidin returned to his native Baghdad last year where he spied a young girl playing and singing on the sidewalk in front of a rubble-strewn lot created by a recent bombing. Rather than survey the wreckage with his video camera, he decided to zero in on a heartbreaking allegory. The footage forming the basis of his haunting video installation, Construction Site, features a young girl gingerly scraping together enough bits of rubble to fill a white plastic teaspoon. A precious commodity for her imagination, the rubble she gathers corresponds if not to a vision of castles and queens, then perhaps safe streets and a stable government.

Allegories of the situation in Iraq can be found both near and far from the epicenter of Baghdad. Although they recall the rampant looting occurring in the weeks following the invasion, Walead Beshty’s Travel Pictures series actually documents the abandoned Iraqi embassy as it still stands in the Pankow District of East Berlin where it has been left vacant since the first Gulf War. Beshty photographed the interior of the building between 2001 and 2004. Unlike other embassy missions, the land granted to the Iraqi mission remained the sovereign territory of Iraq after the dissolution of the East Germany in 1990, and even later and more paradoxical, the dissolution of the Republic of Iraq in 2003. The sense that the fate of the structure would foreshadow the state of shambles in which Iraq was to later find itself was eerily enhanced when Beshty’s film was accidently put through a luggage x-ray. Along with the loss of color and contrast, the prints have also lost a sense of temporality.

Nothing exemplifies the title of the exhibition more than Kenneth Goldsmith’s epic poem The Weather. Known for his appropriationist strategy, Goldsmith dutifully transcribed one-minute weather reports over the course of 2003. Taken from an all news radio channel, they would have sounded like any other year were it not for the invasion of Iraq in the Spring. In response, the anchors gave a dual report combining New York and Baghdad weather conditions for the 15 days of official combat. As the situation in Iraq has deteriorated, the results, in large part because of the recitation style in which the weather report is delivered, have become tinged with a surreal irony for which Goldsmith is in no way responsible.

The much-anticipated report from General Petreus did little to quell the suspicion that Iraq may have become a “quagmire,” a description inextricably linked to the war in Vietnam. Although Colin Powell early on called such comparisons “bizarre historical illusions,” given that there is no time frame for troop withdrawal, those “illusions” are probably looking a little too real. If anything, such a comparison has only gained in detail now that the rhetoric of “shock and awe” and “the winning hearts and minds” has been exposed as having been hopelessly naïve. Needless to say, Ritscher’s immolation, by invoking Morrison also invoked the chronological specter of the Vietnam War, which at the time of Morrison’s death had another decade to play itself out. Although it is highly unlikely that is going to be the case in Iraq, this military campaign is hardly immune to the idea that history repeats itself. But while the remainder of Marx’s adage — first as tragedy, second as farce — is true of many events, war is not one of them. 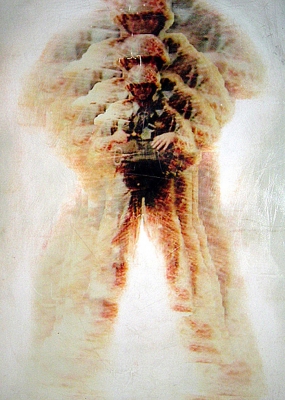