The story of human kind could be narrated strictly through the history of musical instruments. Questions as to the when, where, how and why of their development amounts to the study of the rites and rituals that, taken as a whole, define human culture. The means and ends of all human activity - work and play, love and death - have their corresponding music to mark the occasion. This includes ceremonies of state as they are announced through anthems and military marches. Even warfare, as an aspect of our social behavior with its own formal expression in music, would have to be acknowledged on cultural terms. Alongside the display of medieval arms and plate armor, which can be found in most encyclopedic museums, it would come as no surprise to find an elaborately engraved trumpet.

Reveille, the bugle call which signals the start of the military day, is the subject of Wake Up, a sound and light installation by the San Juan-based artist collaborative Jennifer Allora and Guillermo Calzadilla. For Wake Up, the artists asked a host of trumpet players from around the world, working in a range of styles, to interpret Reveille. Recordings by these musicians will be played over a series of speakers running along a criss-cross series of diagonal corridors that represent a radical alteration of the gallery space. The warm lighting scheme will take its cue from the sound, gradually dimming and brightening in relation to the amplitude of the music.

Over the past several years, Allora and Calzadilla have produced a body of work distinguished by an adroit mix of poetry, play and politics. Although it has assumed many forms, their work is unabashedly social, adeptly engaging a given locale. While the issues and events of a particular region may serve to illustrate a facet of globalization, by giving them concrete representation, Allora and Calzadilla counter the tendency for such issues and events to become abstract. Whether it is their ongoing investigation into Vieques, an island formerly used as a bombing test site by the U.S. military; their rumination on the fate of wildlife under Puerto Rico’s burgeoning industrialization; their paean to a poetry of social protest; or their humorous facilitation of spontaneous public speech with oversized pieces of chalk, Allora and Calzadilla’s work is a critique of socio-political agency in the face of increasingly remote authority.

Wake Up is one of a series of site-specific, sound installations the artists have conceived for three venues: The Moore Space in Miami, The Renaissance Society, and the McBean Gallery at The San Francisco Art Institute. For Clamor, the first in this series, which debuted at the Moore Space this past December, the artists placed a small ensemble (trumpet, tuba, flute, trombone and drummer) inside a large sculpture made to look like a concrete military bunker. The band performed a host of war songs, marches and battle hymns. Among the more standard fare were Barney the Dinosaur?s I Love You and Bruce Springsteen’s Born in the U.S.A, as they were used to torture detainees in Guatanamo, and Twisted Sister’s We’re Not Gonna Take It, as that was a favorite of American forces during the 1989 invasion of Panama. Save for the trombone slide poking through an embrasure and a low window exposing the tuba’s bell, the band was completely concealed. More monumental than the sculpture itself was the band’s performance, which, with over three hours of music, became an endurance test. Bombast gave way to cacophony, which in turn gave way to a peripatetic tumult of disfigured nationalist fanfare.

With Reveille as its source of inspiration, Wake Up is clearly an extension of Clamor. In focusing on the trumpet, however, Wake Up has its genesis in Returning A Sound, a video in which the artists attached a trumpet to the exhaust pipe of a moped that was driven around Vieques by one of the island’s residents. A military call was replaced by the trumpet’s steady, shrill vibrato, its pitch changing with the moped’s speed. Returning A Sound was one amongst several works done and shown in Vieques. Some of the works were didactic, others involved Vieques residents. But unlike Returning A Sound, whose gesture was an elegant response to specific geo-politics, Wake Up is a work made for a museum gallery. Rather than direct engagement with a public about issues of concern particular to a given locale, Wake Up is a sound and light installation conceived on the terms of the autonomous work of art which holds a separation between art and life. Although Wake Up is a metaphor alluding to our current socio-political state of affairs, being a gallery work requires the artists to transcribe such a metaphor into a phenomenological experience that utilizes the gallery space in a manner referring to nothing outside of itself. Toward that end the artists have created a site specific installation whose long, narrow corridors terminate in the four bays that define the corners of the gallery. The division between art and life, however, no longer makes for two mutually exclusive categories. Life has found its way into art and an autonomous art has found its way into life (think of Daniel Buren) to the extent that although separate, each derives its strength through their acknowledged coexistence. As an autonomy historically driven to its extreme would then demand, Wake Up, whose name is meant to imply a rousing of political consciousness, is grossly metaphorical in its use of light and choice of song on the one hand, and grossly literal in their deployment on the other. Circulating between a mode of site-specific installation calling full attention to the gallery space, and a content engendered through a song as rife with associations as Reveille, Wake Up is the institutional counterpart to Returning A Sound, as specific to the physical, cultural and political character of its site - an art gallery - as the moped circling the island.

Allora and Calzadilla are respectful of an art historical trajectory within which the end of art was to question the ends of art. However, more than a full generation removed from the advent of a neo-formalist abstraction, i.e. minimalism, Allora and Calzadilla’s work represents a shift in vantage point: the role of art is being questioned not from the inside out but from the outside looking in. While the ever-pressing question of art’s relationship to politics is currently being framed in terms of activist-oriented practices calling for a direct engagement with a public outside the confines of the gallery, the operative model for Allora and Calzadilla’s practice resembles more closely that of the late Felix Gonzalez-Torres, whose work generated its charge in abiding by a strict formalism but abandoning the autonomy such formalism was meant to enforce.

Wake Up engages the gallery space with complete integrity to a model of site-specificity that came to fruition in the mid to late1960s. Allora and Calzadilla are heirs to strategies whose goal was to dismantle and reconfigure traditional sculptural practices. These strategies include a history of multimedia and installation-based activity. By now, however, such strategies have become a tradition in their own right. As artistic strategies, their claims to radicality expired upon their institutionalization. No matter how dramatic an alteration of the gallery space, Wake Up, when considered as species of form for form’s sake, is an empty shell, which is then made to play host to an equally ossified content in the form of Reveille, that all but dismissed piece of the trumpet’s historical baggage. In this regard, Wake Up is a platform for the trumpet recordings, with Allora and Calzadilla looking to the trumpet players to engage a metaphor that is likewise little more than a shell for what, between the many trumpet players, becomes a vehicle for an incredible range of expression.

The trumpet players who have contributed interpretations of Reveille represent a broad range of styles, from the starkly conceptual approach of Birgit Ulher whose score is featured on the other side of this poster, to the rapid-fire, lengthy post-bop phrasing of Paul Smoker, to the breathy, microphone-enhanced atmospherics of Leonel Kaplan and Franz Hautzinger. In most cases the compositions and performances bear no resemblance whatsoever to the familiar tune of Reveille. While in some cases the musicians use Reveille in a schematic sense (as is the case with Ulher and Natsuki Tamura whose work is divided into three sections, “A”(startle) “B”(shake), and “C”(awake)), the particular details of their approaches to Reveille pale in significance to the deconstruction and expansion of sounds the trumpet is capable of making. In these players’ hands, it becomes clear that the trumpet, if not the most sophisticated, is easily the most exquisite piece of plumbing outside the human respiratory and gastrointestinal systems. If Wake Up can be called an experimental piece, it is not by virtue of its form as a sound and light installation, but by virtue of how far the players have stretched the limitations of an instrument as tradition-bound as the trumpet.

Wake Up appears at a conspicuous moment in our current socio-political morass. Since the Florida debacle of the 2000 presidential election and the ensuing events of the past six years, one cannot help but imagine how different things may have been were someone else president. As a result, we are that much more susceptible to daydreaming. But given that it is the second year of a lame duck presidency, a wake-up call would perhaps seem belated. Wake Up, however, is apropos seen against the shift to Democratic control of the House and Senate and the seeming demise of the Gingrich Revolution. In any case, Wake Up is a metaphor for a desire to effect social change. But Wake Up is not itself a work of so-called “political art,” a false category which assumes a discreet political domain. For Allora and Calzadilla politics is instead a way of looking, meaning politics are both everywhere and nowhere. Although the question of art’s relationship to effecting social change is transmissible from one generation to the next, the answer is not. What worked for one generation may not be applicable to the next. In this regard, it is not simply a question of waking up but also of knowing what time it is. 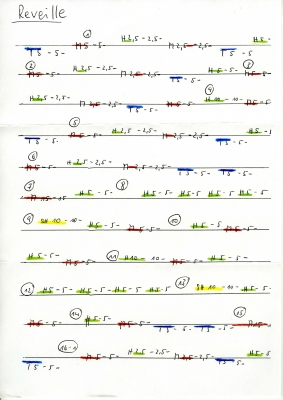