Shanghai-based filmmaker Yang Fudong (b. 1971) is not a child of The Cultural Revolution but of a cultural revolution in more general terms. The steady recession of state authority in determining content and access to the means of film production (facilitated by the advent of digital technology) has resulted in historically unparalleled creative freedoms for Chinese filmmakers of Yang’s generation. With the State’s sanctioning of independent production, film practices across the spectrum have flourished as artists have adopted a variety of positions in relation to the immense economic and social changes taking place throughout China. Some filmmakers have produced comedies and romances specifically to avoid politics. Others feel unquestioningly obliged to address the current changes with all the criticism the censorship boards permit. And still others are unable to adopt a singular approach, producing work in different styles to express different concerns, or perhaps to express the same concerns differently as is the case with Yang Fudong.

Initially trained as a painter at the China Academy of Fine Arts, Hangzhou, Yang has gone on to create staggeringly beautiful, self-produced works of 35mm black and white film. Considering himself a visual artist in the broadest sense, his practice, in addition to film, includes photography and digital video, a booming medium in China. For Yang, there is no singular means for expressing the dynamic and therefore contradictory state of contemporary Chinese society. On the one hand, the improvement in the quality of life attending China’s adoption of free market values is cause for celebration. On the other, radical change cannot fail to be met with a sense of loss and skepticism as such change questions the viability of traditions that constitute individual and national identity. Yang lays stake to both claims, reveling in the rhyme and rhythm of contemporary urban life as reflected in his digital video work, and at the same time questioning his generation’s relationship to cultural values running centuries deep. The latter being a task he reserves largely for his black and white films which have an anachronistic character with references ranging from Chinese films of the 1930s and 1940s, to Nouvelle Vague, to Jim Jarmusch.

The Society will present five of Yang’s films, produced over the course of his career. The exhibition will feature the debut of Part II of Seven Intellectuals in a Bamboo Forest. In addition to the first chapter of Seven Chinese Intellectuals, there will be three older works: Liu Lan, 2003; Backyard: Hey! Sun Is Rising, 2001; and An Estranged Paradise, 1997-2002. This exhibition is concurrent with Between Past and Future: New Photography and Video from China which runs from October 2, 2004 to January 16, 2005 at The Smart Museum of Art, University of Chicago and The Museum of Contemporary Art, Chicago. 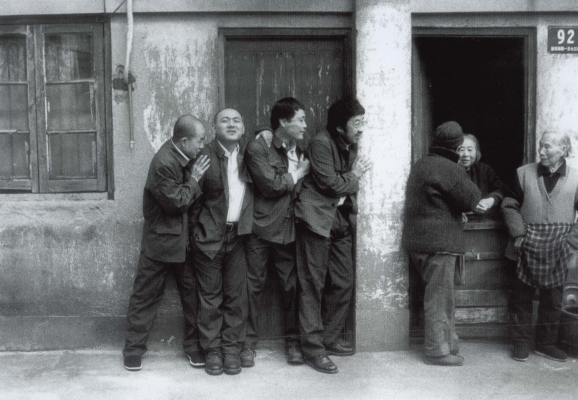