“Forget Irony… Have A Nice Decade.” That headline appeared on the cover of the September 1991 issue of Esquire. Unfortunately, it reads as all too ironic given that the September 11th attacks took place exactly a decade later not to mention that throughout the 1990s irony was anything but forgotten. As if Wayne’s World was enough, NOT!, many took irony as a definitive characteristic of the present moment to the extent that Graydon Carter, publisher of Vanity Fair, declared the September 11th attacks “an end to the Age of Irony.” Broadly defined as a discrepancy between what is expressed and what is meant, irony is inherent to the act of signification making it anything but unique to a given era. Having made a pronouncement no different than sentiments expressed after two World Wars, Carter can count himself quite far down on the list of individuals who have wished for civilization’s delivery into an epoch of truth and moral clarity. The species of irony to which Carter refers, however, is no longer discernible from a nostalgic impulse. Although we are a full generation and a half removed from the Nixon administration, those years still serve to remind us of the degree to which great expectations have been blunted by disappointments or circumscribed by the fatigue of unfulfilled aspirations. No wonder the rock band Pavement adopted a mantra of negative hope — “don’t expect, don’t expect, don’t expect” — as the end refrain on the recording from which watery, domestic takes its title.

“Remember Irony…Have A Nice Century.” From an art historical perspective that is how the Esquire headline should have read. Now that successive generations of artists have long been fashioning sentiment from strategies questioning art’s material, social, and institutional basis, it is safe to say postmodernism’s illustrious past dates back to the early Twentieth Century. Not bound by mastery, suspect of master narratives, and more than willing to blur the distinction between fine art and popular culture, the seventeen artists in watery, domestic have settled into a downer’s groove whose wake harbors laugh tracks and landfills, reruns and ready-mades, impeachments and implants. Lacking the self-consciousness associated with irony, much of the work is vulnerable rather than cynical.

The exhibition includes Michael Ashkin’s bleak but beautiful panoramas of the New Jersey Meadowlands; the respectively modular and procedural assisted ready-mades of Brian Jungen and Joseph del Pesco; the second-hand, unassisted ready-mades of Mary C. Wilson and Harvey Opgenorth; Richard Prince’s explicit depiction of irony in his joke paintings; the haunting, photorealistic paintings of Paul Winstanley; the rigorous deconstruction of a television sitcom by Jennifer and Kevin McCoy; the lovably and laughably degraded commodity-based sculptural tableaux of Conrad Bakker; Jay Heikes’s unadulterated idol worship; David Patton and Dario Robleto’s literal and metaphorical redux of the over-celebrated cult of disc jockeying; Mindy Schwartz’s flirtation with the uncanny via campfire arts and crafts; Christine Tarkowski’s wallpaper and serial sensibility realized in vacuum-formed plastic; Andrew Eherenworths’ subtly warped but oddly accurate graphite renderings of presidents; Siebren Versteeg’s self-portrait of the artist as a young man’s cassette collection. As the title watery, domestic suggests, there is none of the emotional surplus associated with the more heroic work of art. With cameos by Gerald Ford, Billie Holiday, Barry Manilow, and Starsky and Hutch, irony is less the construction of the artist and more a byproduct of nostalgia. For many of these works, the sentimental value in their source material has been spent giving watery, domestic the melancholy feel of a thriftstore. Despite any pathos or humor, the exhibition seeks to recoup the word hope from hopeless, spelling it as two words rather than one, lest anyone think we have run out. 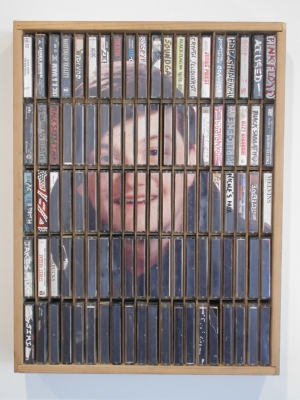