Given the disparate nature of her practice and her interest in language, the label conceptual artist suits Chicago-based Helen Mirra well. The components of her installations are often extremely simple, combining a textual element with a minimalist textile form. In addition, she has produced a sizable output of film and video, audio recordings and artist’s books all of which bring to mind Fluxus. Mirra’s wit, however, is largely at the service of poetry. Like other prominent young artists of the past decade, Mirra has adopted and reconfigured conceptual strategies so that they become the means to more narrative, personal and poignant ends. The form of her work is in fact overshadowed by an unabashedly romantic if not downright cozy sensibility, one befitting her favorite subjects, the sea, the landscape and childhood, themes which extend throughout her work from the video The Ballad of Myra Furrow (1994) in which Mirra dresses as a sailor, performing nautical dirges sans accompaniment on a stormy lake Michigan, to her recent recording Field Geometry (2000), an homage to Friedrich Froebel, the inventor of kindergarten. These tropes unavoidably suffuse Mirra’s minimalist installations with a sense of longing.

Her sentimental streak is of strain running from Bas Jan Ader up through the likes of Felix Gonzalez-Torres. Mirra’s work, however, is distinguished by an interest in antediluvian forms of memory and imagination be they those associated with childhood, a time when the seas held mystery, or an anachronistic yesteryear when people used looms, typewriters, windmills or record players. Mirra’s sense of nostalgia is all pervasive, not simply serving as the sentimental feeling within her work but literally serving as the feeling of her work. Beneath her preoccupation for the aural and linguistic is a keen disposition for the tactile. Her books and records (most notably the 1996 vinyl release Stowaway) are always warm to the touch, packaged and bound in non-descript, earthy materials (felt and or a toothy, matte cardboard). Despite being industrially produced, these materials retain a sense of their natural as opposed to laboratory origins. In addition, she considers her craft - mostly knitting and stitching - a translation of the repetitious manual labor associated with rail and sail.

For her exhibition at The Society, Mirra has created Sky-Wreck, a large site-specific textile work based on the geodesic designs of Buckminster Fuller (1895 - 1983) - engineer, inventor, designer, cartographer, architect, philosopher and poet. Geodesics is the geometry expressing the shortest distance between two points on a mathematically defined surface. Fuller is best remembered for the geodesic dome, a structure that remains the most efficient means for enclosing spaces. Fuller, however, was also a stalwart utopianist whose grandest ideas involved bringing matter and energy into dynamic equilibrium so as to derive more with less. Rather than furthering the aims of the military industrial complex, technology, Fuller advocated, ought to be used to improve the material conditions required to sustain life while reducing the resources needed to do so.
Sky-Wreck consists of 110 triangles cut from a coarse indigo cloth. It is a flattened polyhedral form that will cover a large portion of the gallery floor. The work functions as one of Fuller’s dymaxion maps in which he converted the globe into an unfolded polyhedral form that he then triangulated. Sky-Wreck, however does not represent the surface of the earth rather the shell of sky known as the firmament. Flattened out, it’s edges are a literal representation of the heaven’s horizons. Many of the scientific and spiritual sources from which Mirra drew her inspiration for Sky-Wreck are documented on the other side of this poster whose design is based on the label for Dr. Bronner’s Peppermint Soap. Like Fuller, Dr. Emmanuel Bronner (1906 - 1997) also represents a breed of idiosyncratic, utopian thinker whose vision was to unite humanity. In addition, Mirra was inspired by the interior architecture of the gallery, which consists of an elaborate series of origami like folds configured to resemble a neo-gothic church.

Although Mirra clearly has an aesthetic, her decidedly nondescript objects and installations look as though they have forsaken the visual. This is hardly the case. Her layering of references - literary, architectural and sculptural - is in an effort to generate a poetry that is rich, meaningful and above all relevant to the present in so far as it exploits so as to reveal the overlooked, if not repressed, romanticism lurking in the immediate past. The search for a new poetry, the re-animation of an idle allegorical impulse, places Mirra in the company of such artists as Matthew Barney and Katy Schimert. But unlike either of these artists - both sculptors who resort to figurative and narrative conventions notably in film and video - Mirra remains committed to minimalism, an artifact of the recent art historical past.

Mirra’s interest in poetry coupled with the recent art historical past makes for an informative comparison with poet-turned conceptual artist Marcel Broodthaers. Broodthaers’ prognosis regarding art of the twentieth century was that of loss. Poetry and the visual arts had been reduced to an impoverished semiotics of mere words and pictures, one now capable of serving as an illustration or example of the other as in advertising. For him, Minimalism’s retreat into self-referential primary forms, all in an effort to destroy metaphor, compounded this loss as art in its quest for ever greater autonomy further relinquished its ability to describe life. Mirra likewise is concerned with the relationship between words and pictures as well as words and objects. But where Broodthaers saw bankruptcy Mirra sees potential. Mirra revises Broodthaers’ pessimism by bringing maximum symbolic and literary references to minimal visual signifiers. In the imagination’s expanse, words such as roses, red, life, sky, cow, home, love, blue, hate could mean a little or they could mean a lot. The same could be said of a minimal work of art. In both instances, Mirra has chosen a lot. The issue when various signifiers - words, images, sounds and or objects - are considered in relation to one another becomes how the weight of meaning is distributed between them. A prime example is Mirra’s book Alow (1999), for which she translated three sea-faring sagas (the narrative prose of Herman Melville’s Mardi, and filmic imagery from Sergei Eisenstein’s Potemkin and Buster Keaton’s The Navigator) into an elegant series of poems broadly varying in length, style and tenor. As an installation, Mirra transcribed the scene from Potemkin onto a 16-millimeter strip of blue cloth, which was then hung around the room creating a thin blue horizon line doubling as the expanse of sea and sky. This installation was not a spare poetry of the sublime. It was a sublime poetry of spare, encompassing both meanings of the word, becoming more through less.

All of Mirra’s work is a tightrope-walk between signifiers, particularly as they try to grapple with unfathomable entities such as the sky, the sea and yes, life. Standing before them (or better wading through them) we do indeed find ourselves at a loss for words. Trying to sum up the unfathomable only illustrates the gulf between signifier and signified. Although we turn our backs on nature and cast down our heads before heaven, we can do neither of these things before the slag heap of signs and symbols we have created to represent them. All we can do is hope that something meaningful emerges from the wreckage. Surprisingly enough, it does. It is particularly surprising when it comes from the immediate past and even more surprising still when it comes out of the clear blue sky. 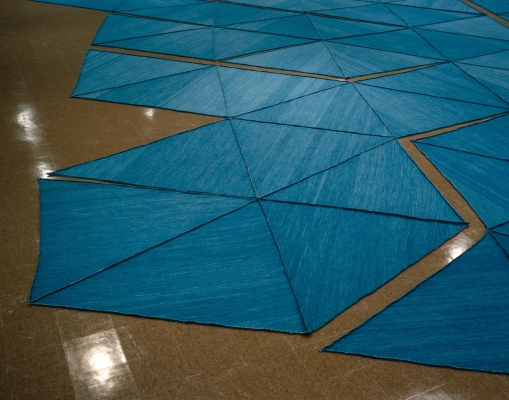