Raoul De Keyser (b. 1930) is one of Europe’s leading painters, exhibiting widely over the last thirty years. This exhibition is his United States museum debut and surveys his work of the last two decades. Like many European artists to come of age after World War II, De Keyser’s career began in the early 1960s, tacitly negotiating developments in American high modernism, from abstract expressionism through minimalism. De Keyser gained notoriety as part of Nieuwe Visie (New Vision), a group of painters that included Roger Raveel, Etienne Elias, and Reinier Lucassen. If De Keyser’s work is any indication, then New Vision was more concerned with the latter half of high modernism from post-painterly abstraction, to pop art and finally minimalism. From 1964 to 1970, De Keyser’s work, in one form or another borrowed elements from each of these developments; the bold palette, hard edge geometry and compositional devices associated with post-painterly abstraction, exemplified by Al Held and Elsworth Kelly; an approach to everyday subject matter characteristic of pop art as in the work of Jim Dine, Roy Lichtenstein and Jasper Johns; and finally, minimalism’s preoccupation with the transition from the second to the third dimension typified by Donald Judd and John McCracken.

In this respect, De Keyser’s career began with the conclusion of modernist painting. Most telling is an outdoor work he constructed in the garden of the Groninger Museum in the Netherlands. Using chalk powder he re-made the corner of a soccer field marked by a lone pennant. Albeit on the anecdotal terms of pop art, De Keyser had essentially arrived at a conclusion similar to the floor pieces of Carl Andre. De Keyser’s demarcated plot of ground was the picture plane being reasserted as the actual ground plane defining real, inhabitable space. The chalk line, a recurring motif in his work throughout the 1970s essentially became the subject through which he would re-enter the field of painting. It emerged in numerous works between the mid 1970s and the mid 1980s, one moment as a broad horizontal or vertical zip reminiscent of Barnett Newman and the next as a compositional device breaking the picture plane into large dual or tripartite areas. The works most revealing of De Keyser’s relationship to modernism’s conclusion are a pair of paintings executed in 1977 entitled Corrections. The works are geometric compositions similar to those of Robert Mangold. De Keyser however, literally treated the canvas as a chalk board, erasing the fine lines of the composition only to reset them in their ghost image. Geometric abstraction, the utopian and stalwart expression of order from Piet Mondrian to Frank Stella, from Kasmir Malevich to Sol LeWitt, was not so much being negated as it was gently questioned. In a subtle manner, De Keyser was clearing a space of doubt, indecision and ultimately reflection within the trajectory of modernist painting, which had recently drawn to a close.

In one way or another, this space has always been present in De Keyser’s work. He never fully abandoned figuration and his investigations into the endgame of modernist painting were highly idiosyncratic. Early in his career, he cited Jim Dine as an inspiration for having “painted about himself” and for being “happy with his home environment … paintings about domestic subjects.” This admiration is still present in many of De Keyser’s works, which at times contain a hint of recognizable subjects such as trees or architectural elements drawn from his immediate private surroundings. Take for example Decoy (1995), the image featured on the back of this poster. The composition is structured around the basic figure-ground tensions of an elementary landscape where the division of the picture plane in two parts can be read as a horizon line where earth and sky meet. The lower lattice portion of Decoy would suggest a visual compromise as to whether one is looking at or through the painting by allowing us to do a little of both. The units of the lattice, however, are highly compressed which further emphasizes the static tension between the upper ethereal background and the lower lattice foreground. The negotiations between foreground and background are left to the formless cloud-like shapes that meander through the lattice toward an indeterminate middleground. Although Decoy qualifies as an abstract painting, the dynamic between its three discreet components register as if taken from direct experience.

Since 1980, De Keyser has gained a reputation as “a painter’s painter.” All paintings have a conclusive logic. They represent a series of decisions as to why a given painting had to look that way and no other. The history of modernist painting, however, is one in which these conclusions were reduced to bare essentials such as surface, support and brush stroke. De Keyser’s pictorial logic is one in which conclusions regarding, composition, color or manner of brush handling are confidently proposed but never asserted to a degree suggesting the evolutionary terminus of an art form. De Keyser, for lack of a better term, makes it look easy as he moves from one painting to the next. Technically, he has a sense of touch that Midas would envy. Although De Keyser has managed to merge various contradictory elements - figuration and abstraction, gesture and geometry, the garish and the restrained - his work in no way exhibits tendencies of a postmodern ecclecticism that would reduce the history of painting to a mere collection of styles. If anything, De Keyser’s work, in modest proportions, has the spirit of painting when abstraction was celebrated for opening new possibilities within the realm of pictorial expression. This, as opposed to a later high modernist abstraction that was taken to represent a series of inescapable conclusions. But even if these possibilities are not so new anymore, painting is a game whose rules we know and a game we have nonetheless come to enjoy. If this is the case, then perhaps painting should be thought of like golf. This would be more than welcome by De Keyser who has already entertained the idea of the painting as a playing field. If De Keyser’s paintings are any indication of his game, then Tiger Woods probably has some competition. 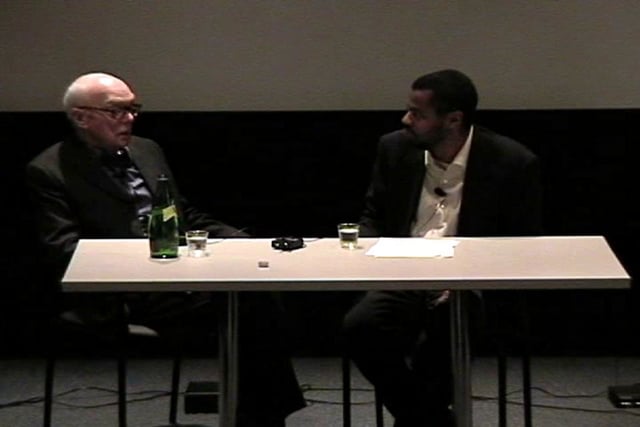 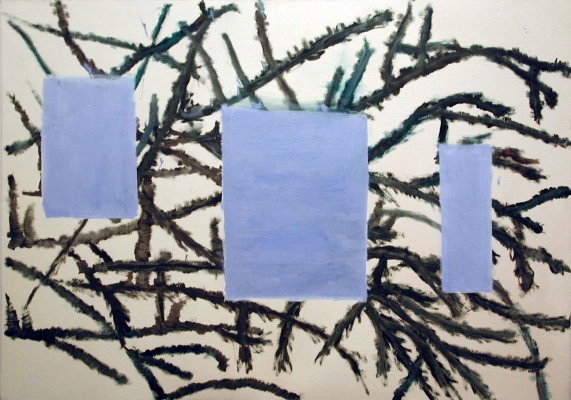