John Wojtowicz. That’s who. One hot August afternoon in 1972 he even attempted to rob a Brooklyn branch of the Chase Manhattan bank. Wojtowicz’s stick-up was not simply a foiled heist. It was a protracted farce. An unexpectedly rapid police response prompted Wojtowicz and his cohort, Salvatore Natuarale to take eight hostages. The police drew crowds, which in turn drew media. Once Wojtowicz revealed that he committed the robbery to finance the sex change operation of a lover by whom he had recently been spurned, there was no turning back. In Wojtowicz, the press found neither a panic stricken thug nor an inarticulate loser but a queer and charming personality whose predicament demanded that he play to Flatbush residents which the media reduced to a studio audience. There were several dynamics at work, not the least of which was a genuine sympathy for Wojtowicz expressed by the hostages inside and the crowds outside the bank. The crime scene quickly became a theater of confession tawdry even by today’s standards. A 10 minute robbery degenerated into a 14 hour stand-off as the cast of characters that made up Wojtowicz’s private life - lover, priest, mother, psychiatrist, wife - offered a parade of pleas. Cops, crowds and cameras, the robbery was a spectacle that eventually served as the basis for Sydney Lumet’s 1975 film Dog Day Afternoon.

Cinema’s veracity can be the product of wishful thinking as much as it can be the product of a quest for objectivity. As for Dog Day Afternoon, its veracity seemed to have been a matter of narrative convenience. Of all the accounts as to what took place during those 14 hours, Wojtowicz’s testimonial is the only one missing. He rejected a deal from Warner Brothers, refusing to meet with screenwriters. After serving six and a half years in prison, Wojtowicz was released, taking up residence with his parents several blocks from the bank, quietly leading his life in the illuminated shadow of cinematic memories that were not his own. Pierre Huyghe’s The Third Memory revisits that particular August afternoon not only using Wojtowicz’s account but starring Wojtowicz himself. Filmed on an austere set, it features reenactments of several scenes from the robbery. As an artist, Huyghe’s role was that of an externalized consciousness, allowing Wojtowicz to star in his own memories.

Huyghe was born in Paris in 1962. His work has taken many forms - pamphlets, public interventions, film, video, photography - suitable to his interest in public space, architecture and last but not least, the movie industry. These reveal him to be something of a progeny of the Situationist Internationale, a pan European artistic movement that dates from 1957 to 1972. Like them, Huyghe’s primary interest is the spectacle - an image or event that mediates human relations. The works for which he first gained attention were a series of illegally executed billboards featuring images taken at the site of the billboard’s location. Decidedly anti-spectacular, these images stood in direct contrast to the false promise of advertising. Huyghe’s most ambitious works deconstruct narrative cinematic conventions. By scrutinizing conditions under which comedy, romance, drama, horror, action and tragedy are constructed, Huyghe exposes the ways in which culture is handled as a discreet material substance subject to the regulation and manipulation of an industry. In works such as Dubbing, in which Huyghe documents the dubbing of the horror film Poltergeist, and Blanche-Neige Lucie, where he conducts an interview with Lucie Dolene, the French Snow White who successfully sued Disney to win back the rights to her voice, Huyghe submits film to a reflection upon its treatment of content as simply another product.

The Third Memory belongs to Huyghe’s recent video works (Sleeptalking with John Giorno and L’ellipse with Bruno Ganz both from 1998) in which a film is supplemented with the memories of its aged, principal character. Commenting on the history of cinema, Guy Debord, author of Society of the Spectacle and the figure most closely associated with the Situationists, stated that cinema could have been any number of things, “historical examination, theory, essay, memories.” Huyghe obviously has all of these in mind. The historical context surrounding the Wojtowicz fiasco, however, lends The Third Memory a socio-political significance outside the history of cinema. Lumet’s film rightfully portrayed Wojtowicz as the quintessential 1970s anti-hero, a cross between a character in Lou Reed’s song Walk On The Wild Side and a member of the Symbionese Liberation Army. Wojtowicz’s robbery attempt was an event tailored to a mass media whose appetite for sensationalism had been fed by several assassinations, the Vietnam War and the Civil Rights Movement. With the 1970 documentary of the Loud family as a seminal precedent, the media had constructed an audience eager to watch lives disintegrate over real time. In this respect, both Wojtowicz and the audience were well aware of their respective and mutually supportive roles in crafting the spectacle. The event was a conscious acknowledgment of human tragedy as fodder for entertainment. For a more recent example one could look to the O.J. Simpson car chase. At a moment when the vulgar use of real-life footage, dramatizations, and the talk show confessional blur the boundary between fact and fiction, between documentary and entertainment, all in an effort to narrate human drama, it is obvious “Who Wants To Be A Millionaire.” It is those behind the camera as well as those before the camera, those who are striving and those who are actually succeeding. 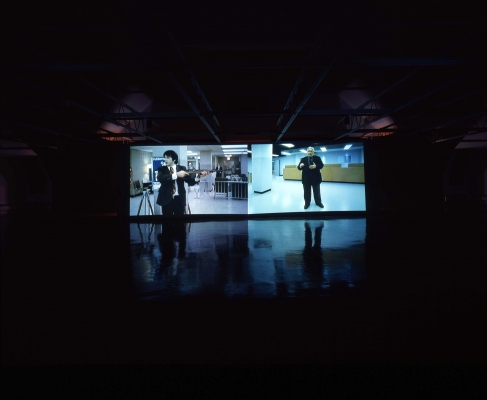