Architecture. It’s everywhere, in a variety of forms. There is architecture as a profession, a practice, a field of activity; architecture as object, as form, as space and finally, the most transparent of these, architecture as metaphor, as a way of thinking, as thinking, as thought. Although he was not an architect, the mathematician and philosopher Renee Descartes’ began an introductory section of his famous treatise, Meditations (1637), with an architectural metaphor. In order to facilitate a more rigorous scrutiny of mind, body, soul, and their relation to a supreme being, Descartes needed to tear down his existing belief system. Before proceeding with demolition, however, Descartes needed another metaphorical dwelling, a mental structure that while consisting of only a few maxims would be sound enough to support the weight of empirical thinking. In other words, as his house of reason underwent inspection and reconstruction, reason itself would need to take refuge in its second residence, the imagination. Descartes’ explorations in logic, Euclidean geometry, particularly his use of the grid, not to mention his famous dictum, Cogito Ergo Sum (I think, therefor I am) were an unprecedented celebration of human reason. He directed his contemplation towards experiences in this world as opposed to a theological reasoning aimed at the next. This made him a seminal precursor to the Enlightenment, and by default the emergence of a modern secular subject whose faith in reason rivaled if not superseded any religious bearings. Descartes’ understanding of the imagination as a space devoted to the interrogation and reconfiguration of reason has remained a constant throughout the four hundred year saga of Modernity. With respect to the historical development of modernity, the space of the secular imagination is second in importance only to the pace of the secular imagination.

German-born, Chicago-based architect Helmut Jahn is a modernist of the Cartesian variety. His gleaming and translucent futuristic structures, often supported by a minimal, girded, metal frame, definitely qualify as reason’s second residence. They fuel our romance with a cosmopolitan glass and steel empire in which the sky is the limit. The reflections in the exterior of his mirrored edifices, or the view through one of his spectacular glass curtain-wall grids, represents an ordered Cartesian existence superimposed on both the urban and natural worlds. For Jahn, however, the rate of technological advances in materials and their application is outpacing the imagination. He considers himself lucky to be practicing architecture at a moment when impatience qualifies as a virtue. Under these circumstances reality’s relationship to the imagination is not that of a constraint but that of a catalyst. Whereas Jahn’s sky-scrapers and his open, light-filled atriums, represent the imagination on a metaphorical level, it is in his drawings that an extremely restless and inquisitive imagination becomes visible. Given the sleek, high-tech look of his buildings, few would think of Jahn as an obsessive draftsman. Buildings such as the State of Illinois Center, the United Terminal at O’Hare and the Northwest Atrium Center look as if they somehow precipitated straight from the realm of digital design. But Jahn’s personal office is without a computer, a conspicuous absence for someone highly suspect of nostalgia. For architects of Jahn’s generation, however, mark-making is second nature and an activity he considers indispensable. Amongst the piles of work on his broad desk one can always find a fountain pen and a blank pad. But unlike others of his generation for whom drawing is an extension of theory, Jahn’s drawing is fueled through building and his is a practical imagination, one that prey’s on a particular project’s constraints. His flights of fancy are rarely an end in themselves but are almost always related to solving the immediate and unrelenting problems posed by any one of his projects from around the globe.

The scope and trajectory of Jahn’s career, from such early projects as McCormick Place (1971) to later projects such as Sony Center Berlin (1999) indicates that his interests have shifted from aesthetic to structural concerns. Maintaining an integrity to Mies van der Rohe’s modernist credo that “form follows function” is the only way Jahn feels the field of architecture can truly advance. The exhibition consists of a few thousand of Jahn’s drawings done throughout his career, from projects built and unbuilt, from initial sketches to detail drawings of technical specifications. These will be displayed in a highly innovative labyrinthine layout designed by this internationally acclaimed architect whose buildings have a particular place in the hearts of Chicagoans and have inspired awe throughout the world. Needless to say, Descartes would marvel at the fantastic age of secular cathedrals wrought by architects such as Jahn. But more impressive would be the fact that they were the product of an imagination at the service of pen and paper and an impatient mind. 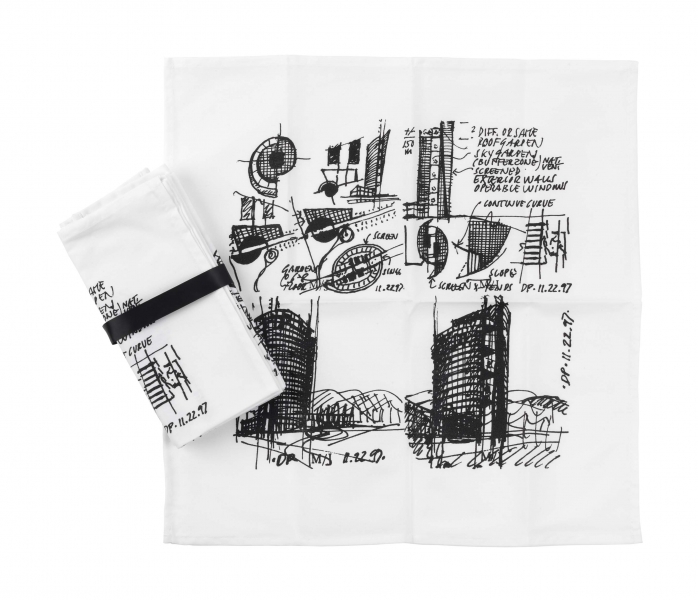 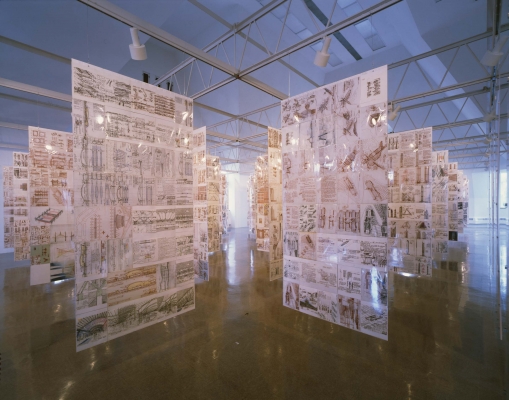