What Makes This Art?

The museum. At least this has been the most enduring answer to this question since the unveiling of Duchamp’s now infamous readymades. In fact, both the question and Duchamp’s succinct answer have become a minor genre in art known as institutional critique. For many artists, institutional critique is meant to complement our knowledge and appreciation of the art object with an understanding of the social, economic and political forces which account for both its production and designation as a work of art. As the label “institutional critique” suggests, it is not the art object but cultural institutions in their many guises from their formal curatorial decisions to the business interests of their boards of trustees which become the subjects of criticism. If by way of Duchamp’s findings, anything in the museum may be classified as a work of art, then for Austrian artist Heimo Zobernig, this includes the space itself, its floors, walls, furniture and windows.

While it may be misleading to classify Zobernig as a strict practitioner of institutional critique, his formal concerns with place, presentation and display of the art works within institutional settings does more to include rather than exclude him from the genre. Zobernig’s simple use of industrial materials such as blocks of Styrofoam, mirrored glass, drywall, and particleboard often draws comparisons with minimalism. But his works are less discreet objects and more of an architectural intervention meant to dissolve categories between painting, sculpture and architecture. Bench, pedestal, platform, stage, sculpture — in Zobernig’s sparse installations these objects are allowed to exchange meaning or serve multiple functions.

Throughout its history, The Renaissance Society has produced site-specific works that have focused on the formal properties of the gallery space, its relationship with The University, or its function as a museum. Artists who have produced work in this manner include Michael Asher, Daniel Buren, John Knight, and now Heimo Zobernig. Zobernig will continue his investigations into the particularities of place through the use of video and a simple yet dramatic alteration to the space using the existing walls. Placed flat on the floor, the walls will serve as a pedestal for a video monitor featuring footage of the artist on a collage-like journey by way of Chicago’s architectural treasures.

While Zobernig’s quirky yet sober interventions are sparse on the surface, their implications for how we may proceed to understand the context of culture and the location and production of meaning are quite profound. Although Zobernig considers the museum a stage for the production of meaning, he would certainly argue against privileging it as the only such site. If the museum were elevated to this status, then the whole Chicago, with its architectural marvels ranging from the horizontal lines of the Prairie School to a skyline dominated by three of the worlds tallest buildings, qualifies as one large cultural apparatus. This is what Zobernig would like to suggest.

If in fact, what art is depends on where art is, then scrutiny of place is of high priority. As art seeks to understand itself through a comparison with objects outside its own classification, it should not have to travel too far. The floors, walls, pedestals, shipping crates, and gallery benches are the most convenient places to begin. Although this may not sound like a flattering comparison, it allows the physical elements of context to be thought of not only as an active component but perhaps the ultimate component from which to reformulate art. And for artists, what could possibly be a more exciting medium than the museum itself. 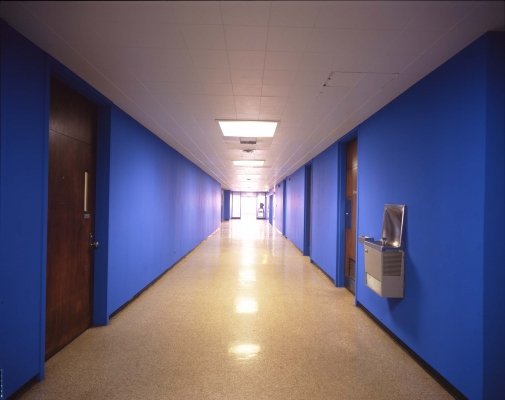