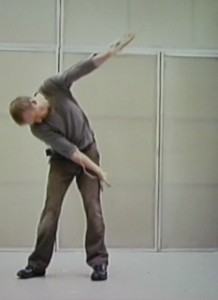 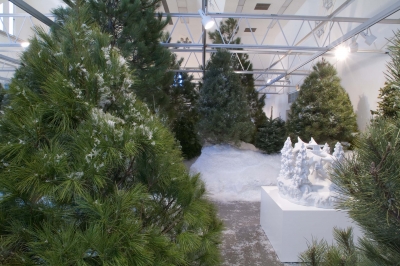 The Renaissance Society’s harshly angled, highly vaulted architecture functions as the stage for exposing the latent Gothic impulse in contemporary America. The works reflect on mysticism, anger, mourning, horror, aggression, angst, apocalypse and the post-human in the forms of text on walls, drawings, sculpture, and video. Poems are derived from Goth Metal song titles (Steven Shearer); blood-colored candle wax drippings ooze and spill from the mouth of a stone grotto (Tony Tasset); a psychedelic meditation on frontier violence depicts haunted mansions and abandoned movie theaters (Jeremy Blake); a body-based cosmogony obsessively repeats tooth, bone, muscle, and hair (Kacy Maddux); a stained dropped ceiling is simultaneously repulsive, beautiful, and horrific (Jay Heikes); a dual homage to the films Invocation of My Demon Brother and Carrie is also a paean to Kali, the Hindu goddess of destruction (Ellen Cantor), a rant calls for a new era ruled by a chaos called the Amorphous Law (Sterling Ruby), and a scene of instinctive aggression is ritually played out in the animal kingdom, (John Espinosa).

Are these times darker than any other? In a post 9/11 world, Goth has persisted and mutated, perpetuating the general mood of foreboding.

There will be an opening reception on Sunday November 13 from 4 to 7 pm, featuring a discussion with the artists and curator from 5 to 6 pm. 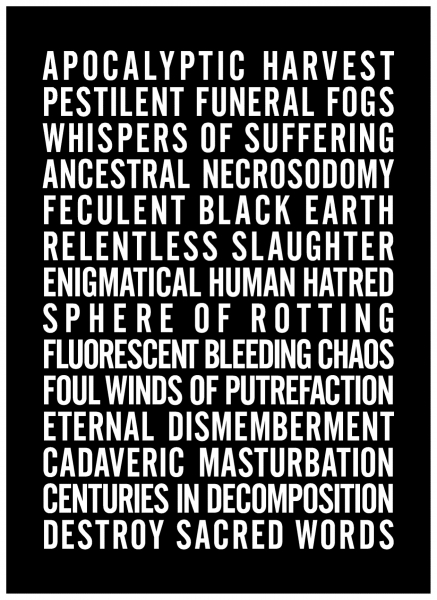 All the Pretty Corpses poster

All The Pretty Corpses: Works in Exhibition

Rebels with a Cross: Christian Metal and Punk Subcultures